I was playing a round recently with my dad at some Whidbey Island Golf Courses. After yet another horrible shot (banana a la derecha), I broke down and chucked my driver across the fairway, expletives violently flying outward from my mouth into the cool, breezy spring air. When I settled down, my dad put a hand on my shoulder and said: “Son, I don’t know why you get so angry…you’re not even good.”

I had the pleasure to golf The Old Course at St. Andrews a few years ago. It’s wasn’t quite the quality of Whidbey Island golf courses, but overall, it was alright. You get an authentic Scottish Caddy with the price of the round, but mine was silent for the front 9, not offering up any advice or even making conversation. An occasional grunt, or “Aye, laddie.” was the extent of his confirmed vocabulary. I kept trying. On the 13th hole, I asked him if he had any tips and to my surprise, I got a few words out of him. “Laddie, I know what the problem with your game is…” he said. I raised my eyebrows. “Okay, and…”. He furrowed his brow and spoke profoundly: “There’s a piece of crap on your driver.” I flipped the club over and looked at the head, but there was nothing on it. “No laddie, on the other end.”

A great course set in the midst of a quiet, lake and tree lined glen of Oak Harbor WA, you’ll find the natural beauty and unique character of one of Whidbey Islands best kept secrets. Welcome, to Whidbey Golf Club, established over 52 years ago in 1961, Whidbey Golf Club is a semi private, family oriented club that boasts of one of the northwest’s most exciting golf courses that accommodates all levels of play from champion to super senior.

This course is one of the better Whidbey island golf courses, with natural beauty, interesting layout, and a great dining experience make WGC a great choice for any occasion. .

Oak Harbor sits in the “rain shadow” of the Olympic Mountains resulting in an average annual rainfall of 19” which is at least 50% less rainfall than most of the Puget Sound area. The lower rainfall, combined with the soil conditions makes the golf course playable in the middle of winter.

Owned and operated by NAS Whidbey, this course caters primarily to military personnel, but is open to the public. An 18-hole, award winning course with spectacular views of the Olympic Mountains. The course overlooks the Strait of Juan de Fuca and Vancouver Island. This is one of the more scenic Whidbey island golf courses. 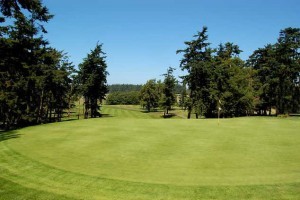 Useless Bay Golf & Country Club is a private golf and country club that features one of the Northwest’s finest 18-hole golf courses. An all-weather, year-round golfing facility on Whidbey Island, the course utilizes the foliage, topography, and natural water hazards of Whidbey Island. With par from the men’s tees a 72 and par for women 74, golfers of all abilities will be challenged and charmed by the experience offer by this beautiful Whidbey island golf course.

Some tournaments during the Spring and Summer months are open to the public. 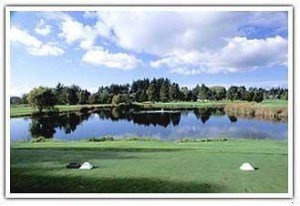 This is one of several public Whidbey Island Golf Courses. Holmes Harbor Golf Course is a par 64 course, with many elevation changes and interesting hole designs. This is a links style golf course where you’ll use your imagination to create your shot, at some point take out most every club in your bag, and face a variety of unique challenges along the way. You’ll also enjoy panoramic views of Holmes Harbor and the Cascade Mountains. 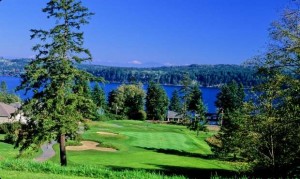 Located in the beautiful and serene forests of South Whidbey Island, Island Greens is a 9 hole, par 3 course that has been rated as one of the Best Courses of it’s type in the Northwest. The highlight of playing here is the beautiful flora throughout the course, including many Pacific Rhododendron. This is one of  the smallest Whidbey Island Golf Courses, but it’s very beautiful.

If you are looking to work on your Long Game, they also offer the only Public Driving Range of South Whidbey Island golf courses. 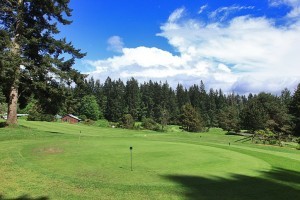 Lam’s is excellent for beginners and those seeking to improve their short-game. 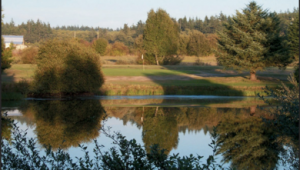